Is It Safe To Eat Spicy Food During Pregnancy ?

Is It Safe To Eat Spicy Food During Pregnancy ? – Nutrition plays an important role in keeping the expectant mothers healthy. Andnutrition in pregnant women depends on the foods they consume before and during their pregnancy. 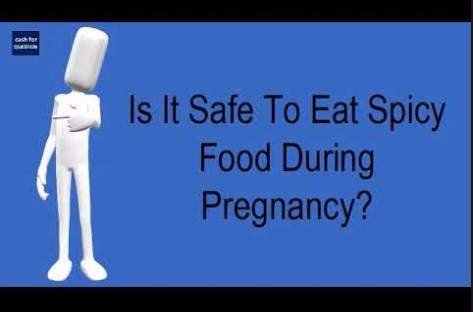 Foods consumed by them depends on theireating behavior, which in turn depends on different factors such as health status, social environments, availability of foods, and individual needs and want of pregnant women.

Many pregnant women crave for sweet foods whereas some crave for spicy foods during theirpregnancy. In fact some pregnant mothers just can’t stop craving and eating spicy foods.

We all know that all the eatables are not suitable for pregnant women. So now the question arises that is it safe to eat spicy foods during pregnancy?

There are several rumors linked to the consumption of spicy foods during pregnancy. But these rumors are not backed by research. They are just based on common observations.

Some people believe that food cravings by expectant mothers for different types of foods may indicate the sex of the unborn baby. It is said that pregnant women carrying boys crave spicy foods whereas those carrying girl child crave sweet foods.

You must have heard thatconsumption of spicy food may bring on labor. Though no conclusive research has been conducted in this matter, this rumor may be true to certain extent.

It can also be explained interms of prostaglandin. When you eat spicy food during pregnancy, it increases the production of prostaglandin, which helps in contraction of muscles and induces labor.

Sometimes irritation and diarrhea are caused by spicy foods.Dehydration can occur as a result of diarrhea, which may cause contraction of muscles to start.

In general, spicy foods are safe for expectant mothers and their babies, but experts recommend limiting their intake or avoiding completely, particularly during the third trimester.

Consumption of spicy foods by expectant mothers can cause heartburn, diarrhea, bloating, and gas. If you have planned to breastfeed after the birth of your child then you should eliminate spicy foods from your diet. The flavors and gases from these foods may enter your baby’s digestive system through the breast milk and cause harm to your child.

Related Posts of "Is It Safe To Eat Spicy Food During Pregnancy ?"